Skip the Needle Flips the Script 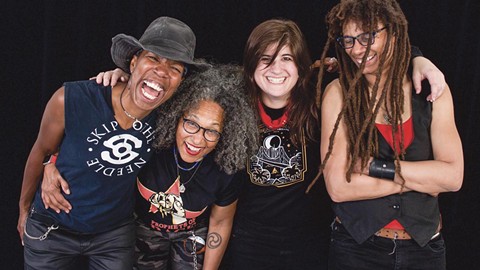 Skip The Needle is a “Who’s Who” of recent Bay Area Rock history comprised of four women. Kofy Brown became known as a rapper in the San Francisco hip-hop scene in the mid-1990s, before focusing on rock with her own band and forming the famed punk band Sistas In The Pit. Shelly Doty, her colleague in that endeavor, had her first brushes with fame playing in the jam band Jam Bay, before forming the Shelly Doty X-tet, a multi-genre group with rotating members whose music was widely received as innovative, experimental, and free. Katie Cash has established a highly followed solo career in heavy rock while leading the hard-driving band, Year Of The Fist. Vicki Randle has played with just about any of the greats one can imagine, from Mavis Staples to George Benson, but is best known from her long-term seat in the band on The Tonight Show with Jay Leno.

With all this experience, history, and collective achievement, how is it that the members of Skip The Needle are not better known?

“It’s so hard for people to allow black women to just be rock musicians,” said Randle, who plays bass, percussion, and sings. “We’re rock musicians. We can be rock musicians, but for some reason, if there’s a black woman in the band, it was like, ‘Wait, you can’t do this. This isn’t rock music. You can’t play rock music. Do you guys know any Aretha Franklin?’ Sister Rosetta Tharpe pretty much invented what we know as rock and roll, and somehow she can’t take up the same amount of space as Eric Clapton.”

Many have miscategorized Skip The Needle’s music as “funk” or “punk.” This has been a problem for women who rock since The Runaways, Heart, and many others who have made amazing rock records only see them eclipsed by the likes of Jon Bon Jovi. Add being a queer, person of color, and the mainstream’s impulse to re-define and re-categorize amps up the nth degree. Except for Cash, all the band members are black, and all identify as queer, so the American vision of rock is partly to blame. Skip The Needle’s debut album, We Ain’t Never Going Back hopes to shatter that vision in both form and function.

Each track on the album is a proclamation of space, history, and a call for liberation. From the bone-crunching opening track of “Battle Cry (Ay Ay Ay)” to the hard-hitting title track that closes the album, We Ain’t Never Going Back is an amalgam of influences that both pays homage to rock and roll even as it expands its parameters.

“Every time you skip got the needle, you’re going to hear something different,” Brown said about the choice of their name, “whether it’s Katie with Year Of The Fist, or Kofy Brown and Shelly Doty with Sistas In The Pit, or Vicki Randall. All our influences are different. Skip The Needle is saying ‘take a ride with us and listen to different genres and styles of music.’ That’s who we are.”

“It’s like rock with the jazz attitude,” said Doty, who plays guitars and sings. “We’re bringing all of it together and not thinking it needs to sound a certain way. With Skip The Needle, and I’m kind of a zealot about this, it’s about the four of us making the music and doing whatever we want whenever we want.”

The world is changing rapidly, and with all the deadly, negative reactions to that change being seen every day, it can be missed that movements, like the one forming around Skip The Needle, are showing up, coming out, and getting vocal.

“There is a younger generation accepting us in a way that the generation came before them didn’t,” said Cash, who plays guitar and sings and has a Master’s in music composition. “They’re wanting and needing what we’re doing, where older listeners had tried put our music into a box. I’m feeling that a lot lately. You can’t deny it. People want it. People are excited about it, and I’m feeling that in a way I haven’t before.”

Brown, who plays drums and sings, echoed Cash’s observation. “We’re seeing teenagers and people in their early twenties, saying, ‘Oh, this is what I’m talking about.’ The generation before them had set expectations, as if they already knew what our music would sound like. I would love to see that broad sort of net cast of what are your expectations and what actually is, which is just bursting at the seams, and is flying into the face of all expectations.”

What accounts for the newfound following is an acknowledgement that marginalized women can and do rock and have been from the very start of a genre they helped invent. Skip The Needle approaches the music in a non-competitive way that many would consider non-traditional, but is in fact, “radical” in that it returns to the improvisational roots of the genre.

“Working on the title track ‘We Ain’t Never Going Back,'” Randle recalled, “we’d started playing in the room and, with four lead singers and four songwriters, whoever feels the music can add to it, even if we each have distinctly different styles. The basic song is Katie’s and that’s just the way it came to me. That’s the way it felt. I heard it and said, ‘Can I write those lyrics?’ I felt like I crossed a genre with Katie’s guitar lick.”

The spirit of collaboration, communication, and freedom is contagious, and as the band’s live shows and quickly growing following can attest, there’s clearly a need for it now more than ever.

“It’s not just coming at people with great music, which we have,” added Randle, “it’s also that sense of togetherness. We all lay down four-part vocals, and we give the sense of hopefulness and the sense of shared compassion and understanding of each other. That’s our ethos. That’s our brand. The music and the ethos are the whole thing.”