Blending the Electronic and Classical 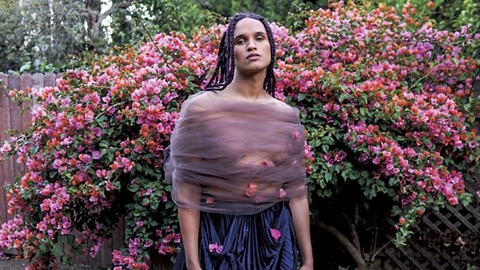 In the theater program of the Redwood City high school Davia Spain attended, she was a “triple threat” — a student talented in singing, dancing and acting. Today, at age 24, standing 6’4″ tall, identifying as transgender, mastering rigorous classical training in the dichotomous vocal realms of opera and jazz, adding video and sound engineering skills, and educated in documentary filmmaking — it’s fair to say Spain is a multi-threat.

Her profile and achievements invite admiration, but also discomfort, disdain, phobia, ostracism, and even overt anger in the court of public opinion and the unfettered circus of social media. The reasons run deep, thick with social, historical, and cultural implications.

Addressing issues faced by trans people and drawing correlation with global topics — environmental degradation, incarceration, and neo-colonialism; all viewed through the lens of Afrofuturism — Spain will debut her new album, Dawning, June 15 at Berkeley Art Museum’s Black Life series. The eight-track album fuses Spain’s lyrics with opera, jazz, acoustic, ambient, experimental, downbeat, and other electronically manipulated sounds. Developed as the soundtrack for a multimedia piece that incorporates theater and film, the album is produced in collaboration with cellist Peekaboo Jenkins, who will appear with Davis at BAM.

“There was a gap in sound I experienced,” Spain said about her work. “I wasn’t finding electronic and classical together in a live context. Although there are some artists working in that, I wanted to dip my hand in it too.”

Integral to that “dipping” was the foundation in classical vocal training Spain received from age six, when participation in a church choir set her on a trajectory that included dance, theater, and a year studying opera and jazz at Pepperdine University. Finding fascinating connections between the art forms, Spain nevertheless encountered stark realities. “Dance is so much about the body that there were expectations; specific things that were feasible,” she recalled. “At six-foot-four, it was transphobia that I experienced: traditionally, men lift women. I didn’t fit into that. Even when I was identifying as a woman I was asked to lift people.”

Musical theater, she realized, was equally limiting because the number and size of trans roles in standard repertory is minimal, or non-existent. “I took it into my own hands to create something I like and enjoy. I went back to school for filmmaking. Film is another tool of storytelling.”

The new album as a piece of a music can stand alone, she suggests, or be a modular component of the larger work. “I wanted something that could be taken apart, then put back together,” she said. “I could do a music show or a dance show or a show of live theater or film … or do them all together.”

“What makes her so amazing is her steady commitment to craft, her world-building imagery and her attunement to the social contexts in which we live,” said Ryanaustin Dennis, who co-programmed along with Chika Okoye. “If she is the future, I welcome it with open arms.”

Okoye believes trans and queer artists included in the series add richness to conversations and breadth to portrayals of Blackness.

Major themes Spain grapples with in addition to the day-to-day, jarring experience of being trans, include intuitional knowledge, environmental neglect, and colonialist power that dictates a preference for linear time. “If we as a culture are neglecting our environment, we’re neglecting ourselves,” she said. “What are the parallels and the remedies? How can we harness the earth as a tool for preserving our personal bodies while preserving it?”

Spain describes linear or chronological time within storytelling devices, historical books, cultures and societies as a power model created to suppress ancient, ancestral knowledge. “It keeps people more docile; dependent on colonial power for resources,” she said. “But in reconnecting to ancestral history and (alternative) modes of seeing, the past, present, and future are concurrent. You have control over your destiny, your timeline.” For example, a person’s inner child might inform or “talk to” the adult self, flipping upside down the usual dynamic of an adult reflecting on childhood. An ancestor’s voice might be “heard” in archival letters or accessed with alternative reality devices.

Which leads to hope. The album’s title track builds sonic textures from nature, other musicians, freedom. “It’s about trust,” Spain said. “I wrote it to symbolize when you can finally see clouds part, see the full moon and feel it’s brightness. It’s a returning to light and love.” A transition song that moves from slow to uptempo, Reasons, has lyrics reminiscing on a past time that in retrospect served as a launch pad for growth. Letting go of personal anchors as a way of ascending is a motif throughout the album.

“Sure, I deal with darkness, but all of that is kind of beautiful,” Spain said. “Trans stories get put in a tragic box, not about how strong and resilient we are. It’s important I share how crucial it is that we take care of ourselves and care for each other as humans. It opens up possibilities.”